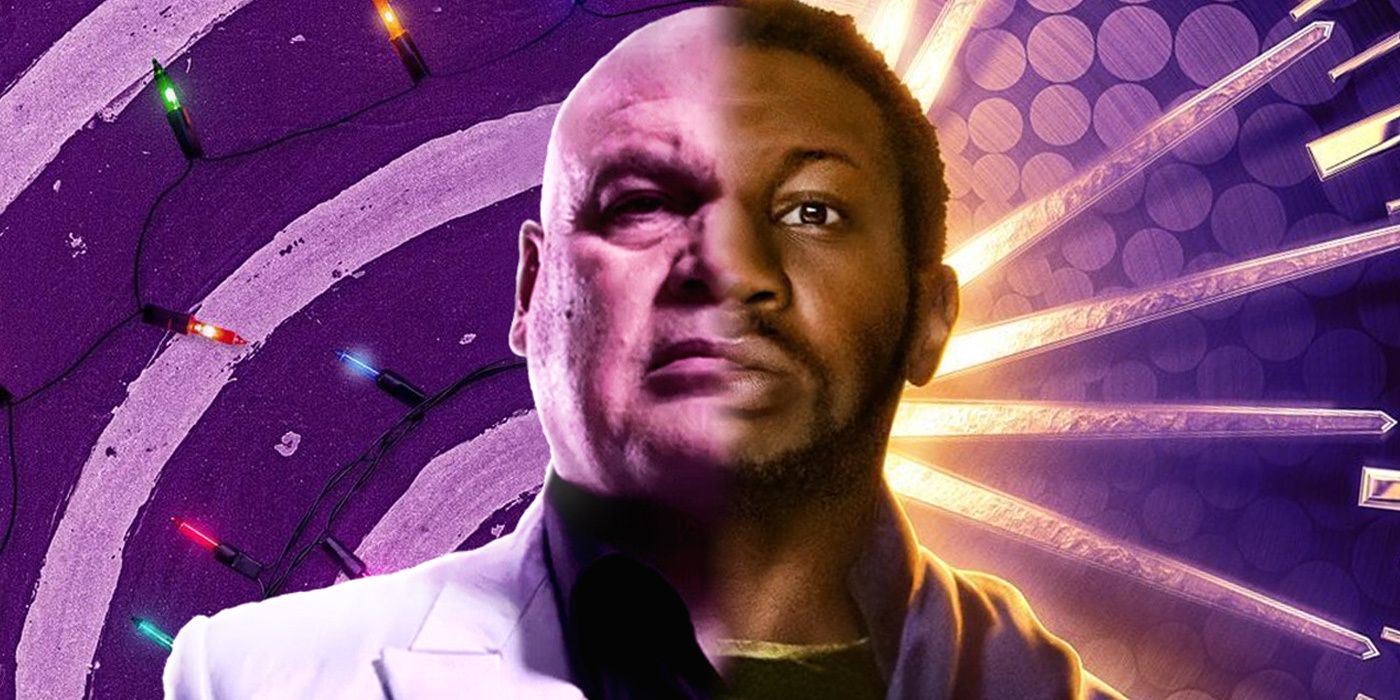 At the end of an important episode of Disney+ Boba Fett’s BookSheriff Cobb Vanth (Timothy Olyphant) is greeted by a stranger from the desert. The person, obscured by a gigantic hat and head tilted downward, ominously offers Vanth far more money than anything Boba Fett offers. After Vanth refuses to give in to this newcomer, the figure raises its face to reveal that it is the devious bounty hunter Cad Bane (Corey Burton). On paper, this looks like a monumental moment for Boba Fett’s Bookintroducing a cunning and legendary bounty hunter who could go up against the series leader.

Unfortunately, this scene happens in the final scene of the penultimate episode of the entire program. There is now little time for him to make an impact on the viewer or develop a relationship with the characters in the series. Bane’s last-minute arrival is narratively confusing, but it’s sadly par for the course during Disney+’s event TV series, which started dropping big baddies like this at the last minute. Just because it’s become mainstream doesn’t mean it should remain so important.

RELATED: The Best New Movies and TV Shows on Disney+ in February 2022

This tactic became especially prominent in Marvel Cinematic Universe programs, which began to have off-screen villains pulling the show’s plot strings. However, those same productions refuse to reveal who’s behind it all until it’s almost time to wrap up the show. One of the most egregious instances of what happens in a Marvel project was on The Falcon and the Winter Soldierwhere an oft-mentioned figure known as The Power Broker was revealed to be Sharon Carter (Emily VanCamp) in the season finale.

Make Carter’s true allegiances known much sooner to the public and the principal Falcon the characters would have done so much for the series. In particular, it would have given a more concrete villain to the two main superheroes while allowing Carter to take on specific nuances as a character rather than being a vague background player. Instead, this information is kept hidden until a clunky final episode reveals that neither Sam Wilson (Anthony Macky) nor Bucky Barnes (Sebastian Stan) never receives the information. The lack of clarity on Carter’s true intentions robs this program of a definitive villain while also presenting itself as a way to prepare this character for future adventures in the Marvel Cinematic Universe.

While not as bad, other Disney+ Marvel productions Hawk Eye still frustrating in his decision to leave Wilson Fisk/The Kingpin (Vincent D’onofrio) away until the last episode. Even beyond the excitement of seeing this incarnation of Fisk even more, allowing Fisk to appear throughout this season of Hawk Eye would have strengthened the relationship between him and Echo (Cox of Alaqua). While D’onofrio doesn’t miss a beat in his intimidating presence as Fisk, he couldn’t help but feel like an afterthought by being left out of much of the show.

And then there is Boba Fett’s Book, the program most plagued by this recurring narrative problem. For much of the show’s runtime, the closest thing audiences have to the antagonists is the loosely defined Pyke Syndicate, a criminal organization with no memorable figurehead to its name. Potential adversaries that Fett must face, such as a pair of Hutt siblings or Stephen Root as a disgruntled townsman, fainting completely from the spectacle, never to be heard from again. The whole program just begs for a concrete villain for Fett and his cohorts to face. Keeping Bane away for everything Boba Fett’s Bookwriters Jon Favreau and David Filoni rob the production of a concrete antagonist that could lend interest to a dramatically inert spectacle.

While each of these shows deals with different storylines, their decision to make up for keeping the main villains off-screen for so long is remarkably similar. Whether it be The Falcon and the Winter Soldier Where Boba Fett’s Book, the protagonists will take care of fighting generic armies of bad guys while waiting for someone more concrete to arrive. The Flag-Smashers, the Pyke Syndicate goons, the Tracksuit Mafia of Hawk Eye, they all end up feeling like cannon fodder killing time until the show drops the main villain. Without any compelling dynamics established between heroes and villains, the drama of these individual programs suffers significantly.

This surprisingly consistent issue is particularly troubling because it goes against a fundamental principle of making a TV show in the first place. This is where you can let the characters breathe and allow viewers to get to know them over multiple episodes. The history of small-screen programming is full of villains that people loved because they could go in interesting directions through long-term storytelling. Does Ralph Cifaretto (Joe Pantoliano) work as well as an opponent for Tony Soprano (Jacques Gandolfini) if he was just dropped for a temporary appearance in the last episode of a season of The Sopranos? Same as Gus Fring (Giancarlo Esposito) in breaking Bad?

The nuances and moments that people appreciate the most about these devious characters emerge over the time that audiences spend with them. Of course, Disney+ event shows have fewer episodes to work with than your average HBO or AMC drama. But even with only six or seven episodes, programs like Boba Fett’s Book could easily give their respective villains more time to convey a menacing presence or even go in unexpected directions.

Of course, there are reasons why this has become a go-to storytelling method for Disney+ shows. On the one hand, it offers a great chance for Boba Fett’s Book and similar properties to get a massive social media boost late in their runs. Since these shows air weekly, they have to do something to remind people that new episodes are coming. Dropping big baddies played by familiar characters is one way to get people talking enough on Twitter to ensure people will stay tuned. What’s good for social media traction, however, isn’t good for TV storytelling.

There’s also the fact that many of these shows are meant to play out as stretched out movies. The Falcon and the Winter Soldier in particular, much of its pre-release marketing hype was built around the fact that it was meant to be a super-long feature film rather than a traditional TV show. Considering how often modern Disney films, from Marvel fare to Disney Animation properties, use the “nasty surprise” narrative device, it’s no surprise that it’s managed to sneak into Disney+ programming. What works like a great third act revealed in a conventional movie, however, doesn’t translate as well within the confines of a miniseries. By mimicking cinema, properties like Boba Fett’s Book avoid the chance to enjoy the unique benefits of television as a storytelling medium.

The recurring and clunky use of last-minute villain reveals is particularly frustrating since a recent Disney+ show even provided a demo for doing this narrative trick right. Lokia program designed to function as a traditional TV show rather than an elongated film, retained the powerful figure of He Who Remains (Jonathan Majors) off-screen for every episode except for the Season 1 finale. However, this program relied on the limited screen time of Who Remained, in particular by making its reveal intentionally underwhelming. He wasn’t a threatening Thanos-like figure, but rather someone closer to Willy Wonka. Loki (Tom Hiddleston) and Sylvia (Sophie Di Martino) had come all this way to find…this guy.

It was a great conclusion to their journey, especially since Remainer not being a physical threat meant that big fight scenes could be avoided in favor of conversations between the two Loki variants. Keeping the villain offscreen until the last minute played straight into the themes of Loki while the successful sources of tension that defined previous episodes (namely the uncertainty over whether the Time Variance Authority could be trusted) meant the series had no shortage of antagonism thus far.

Loki did this narrative tactic so well that it’s shocking to see Boba Fett’s Book and other Disney+ programs are struggling so mightily with how to properly deliver villain reveals. It’s not enough to make people excited to see something familiar, there has to be a reason this antagonist is featured so late in the game. Done right, going this route can enhance the themes of your show and say something deeper about the characters you know intimately. Unfortunately, too many Disney+ shows have gone in the opposite direction by looking for easy fanservice pops instead of entertaining TV storytelling.

The star says the upcoming show allowed him to explore a vigilante’s psyche in depth.

Douglas Laman is a lifelong film buff, writer, and Rotten Tomatoes-approved critic whose writing has appeared in outlets including The Mary Sue, Fangoria, The Spool, and ScarleTeen. Residing on both the autism spectrum and in Texas, Doug loves pugs, showtunes, the Wes Anderson movie Fantastic Mr. Fox, and any Carly Rae Jepsen music.

Avatar The Last Airbender Reportedly Has Two Games In Development

I’m a VIP tour guide at Disneyland. Here are 12 of my favorite things to do in the parks.