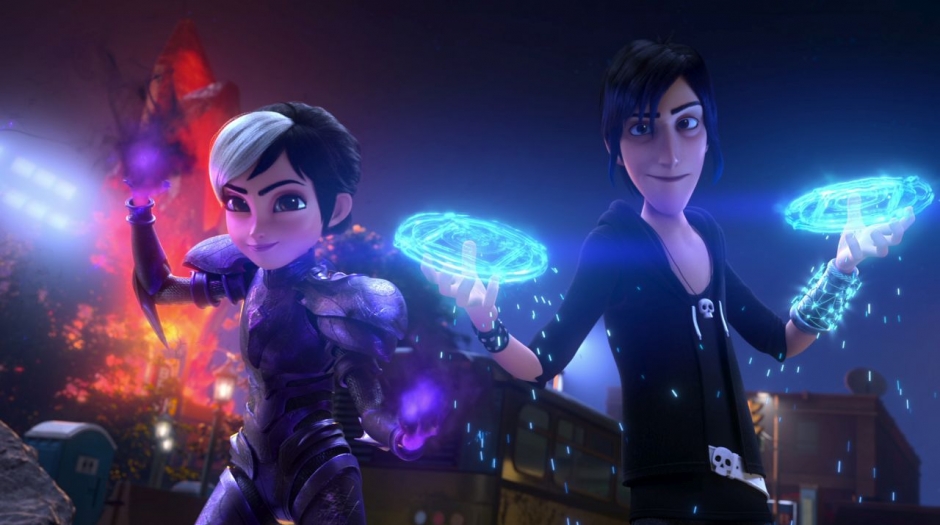 Scale the visual heights of ‘Trollhunters: Rise of the Titans’

As of 2016, DreamWorks Animation Trollhunters: Tales of Arcadia, the brainchild of Oscar-winning filmmaker Guillermo del Toro, entertained audiences with three consecutive sets of thrilling, action-packed episodes. The franchise, which won five Annie Awards, eight Emmy Awards and three Kidscreen Awards, concluded in July 2021 with the feature film 3DCG Trollhunters: Rise of the Titans. It was also just nominated for an Annie for Best FX – TV/Media

Although both a continuation of the 88-episode trilogy and – in terms of scale and visual ambition – and a significant departure from what came before, Trollhunters: Rise of the Titans pushed the technical envelope for all it was worth. The results, as we now know, were dramatic; getting there, unsurprisingly, has not been easy.

“Trollhunters: Rise of the Titans was the most complex and challenging animation project I’ve had the pleasure of working on to date,” says Brandon Tyra, Additional Visual Effects Supervisor. “Guillermo made it clear early in production that he wanted this film to be big and push the boundaries of what we could achieve. So compared to the rest of Tales of Arcadiathe scale, range and total number of FX planes for The Rise of the Titans was significantly larger.

“Not only was it harder than Tales of Arcadiaadds VFX supervisor Greg Lev. “It was by far the most special effects-heavy film I’ve ever been involved with in my 20 years at DreamWorks. And the tricky part was that while we wanted to raise the quality level of the episodic series of “a decent amount we had to make that leap without it feeling like a whole different show. I’m happy to say that I think we nailed that part.”

The success of this transition, Lev observes, was largely down to the fact that they eventually devised a style that was an amalgamation of the various styles they had used throughout the three series. When asked for an example of how FX production expanded on established work earlier in the franchise, Tyra cited magical effects.

“In the Tales of Arcadia trilogy, we created different types of magic effects for magician, troll and alien characters,” he explains. “For each series, we tried to give each effect its own signature. For example, troll magic was more energy-based, wizard magic was smoke-based, and alien technology was light-based. In The Rise of the Titansthe characters found a way to combine magic and alien technology, which meant that we not only had to keep the signature look, but also create new special effects that embraced the looks of all three.

Tyra adds that they also used this as an opportunity to update the quality of some effects, like Claire’s shadow portal effect. “In the series, it was a flat 2D distortion effect,” he explains, “but in The Rise of the Titans we were able to make it more of a 3D smoke simulation which allowed for lighting and better integration into the environment.

Besides the need to create new FX to meet story demands and the enhancement of specific effects, Tyra points out that the greater sophistication of FX work was evident in virtually every aspect of the narrative.

“We looked at many references and had many conversations with our partner studios to develop these special effects and discuss how the special effects could help tell the story,” he recalls. “We focused on creating very natural detail in the simulations, and we also added a lot of atmospheric layers like dust, ash, and embers to many of the sequences. In addition to giving the shots greater depth, the chaotic movement of the particles also created a sense of tension and urgency. The FX really helped us sell the scale of the destruction wreaked by the Titans and reinforced the idea of ​​the story the world is coming to. its end unless our heroes intervene.

Lev adds, “We really focused on creating a new library of unique special effects for each character. These were inspired by the existing look of the previous work, but stylized with a new attention to detail, and made more realistic by removing their three-dimensional qualities.

In a film that both VFX supervisors say was the most complex and FX-heavy production they’ve ever worked on, does it even make sense to talk about which sequence was the toughest? Apparently it is.

“The opening train sequence was the hardest,” Lev explains, “in that we had to have an incredible amount of effects in the tight space of a subway car, without the special effects taking the relay of the reading of the characters and the whole narrative.”

Tyra seconded the nomination. “The Metro City Chase had multiple characters fighting in a small moving subway train, all while battling various types of complex magic. With so much going on, it was a challenge to make sure we could see the characters and tell the story without letting all the shiny magic effects become too distracting for the viewer.

He continues, “If I had to pick a top three, the other two would be the Hong Kong Harbor fight between Gun Robot and the Fire Titan, and the Ice Titan fight with the Earth Titan in the national park. Hong Kong Harbor combat was difficult due to large-scale water simulations. We had characters the size of skyscrapers fighting in the ocean. We also had to make artistic choices with the water physics to make sure the big, slow splashes of water didn’t overpower the action. The fight between the Ice and Earth Titans was also challenging due to the many large-scale fluid, destruction, and vine/tree simulations.

As for their favorite sequence, their opinions differ.

“I enjoy the fight sequence in the national park the most,” says Tyra. “It’s an exciting action sequence with tons of complex effects simulations, but it’s also a very emotional scene. I think it’s a great balance between action FX and character performances in movement.

For Lev, it’s the fight between Gun Robot and the Fire Titan in the harbor. “That streak went off brilliantly,” he recalls, “and it was always such a joy to see the rapid, yet beautiful, progress that was made with each iteration.”

Inevitably, the last question was about how they felt about the end of the five-year adventure.

“It’s really bittersweet,” Tyra shares. “I was there from the very beginning, so it’s been amazing to watch these characters grow from the first pilot episode of troll hunters to the cinema The Rise of the Titans final. I’m lucky to have been able to work alongside these incredibly talented cast and crew and learn from them.

“It was definitely a highlight of my career to work on such a massive project, to bring Guillermo’s vision to the screen with such a talented group of people,” says Lev. Then he thoughtfully adds, “I think it was a good time to wrap up the story, and I think we managed to do that in a very exciting and beautiful way.”

Jon Hofferman is a freelance writer and editor based in Los Angeles. He is also the creator of the Classical Composers Poster, an educational and decorative music timeline that makes a wonderful gift.