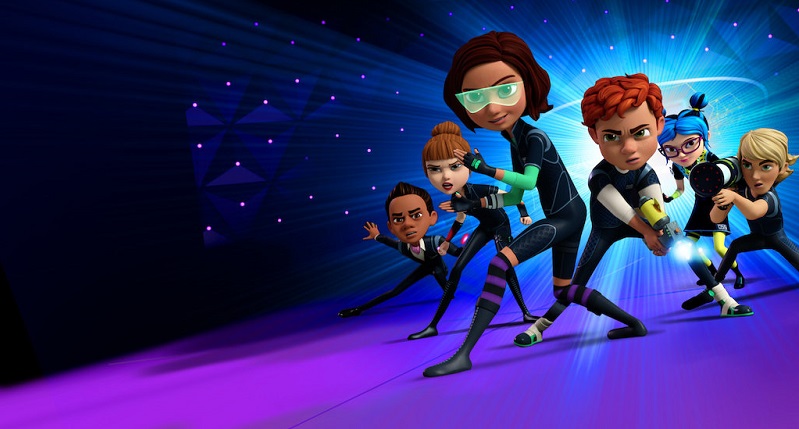 Not all age groups can watch James bond movies because while the content is captivating, it is primarily aimed at adult audiences. However, there are tons of great quality spy thrillers out there for all age groups and we’ve enlisted the Seven Names You Must Watch With The Kids In The House. These movies involve car chases, baddies, cool gadgets, and all the other cool stuff that makes for a fun watch.

Parents will even find themselves watching these light comedies with the little ones, well, they might find their kids pretending to be the ultimate secret agent!

You will feast and take a roller coaster ride while watching the animated hit Spies in disguise. He is voiced by MCU actor – Tom Holland, who played Walter Beckett, a young scientist tasked with helping a high-profile secret agent. When secret agent Lance Sterling (Will Smith) is accused of being a traitor, he searches for Walter for his concealment invention.

Sterling unwittingly absorbs a mixture that turns him into a pigeon. Before Watler can develop a cure, cyber expert terrorist Killian (Ben Mendelsohn) strikes. Not only do Sterling and Walter have to stop Killian, they also have to avoid being captured by the secret agency HTUV.

Besides being a very entertaining film, Spies in disguise gives some very important lessons. They show that teamwork is important because working together makes us stronger, we tend to listen to our own differences, and ultimately accomplish a lot more in life by resolving conflicts. The film also revolves mainly around a theme that violence does not solve all situations because it only causes massive destruction.

Children who enjoy watching vehicles race against each other and content that gives them an adrenaline rush, should register for Cars 2. The film features sequences that are sure to keep the little ones on the edge of their seats.

Star racing car Lightning McQueen and the incomparable tow truck Mater take their friendship down the road from Radiator Springs to exciting new places when they travel overseas to compete in the first-ever World Grand Prix to determine the car la fastest in the world. But the road to the championship is strewn with potholes, detours and hilarious surprises when Mater finds himself caught up on an intriguing adventure of his own – international espionage!

The characters, the musical score, the story, the animation, the mystery, the feelings, the laughs, the great songs (including the end credits song), everything in the movie is absolutely satisfying, amazing and awesome to watch. 100%!

Madagascar the movies are always a treat to watch and this penguin version is nothing short of a riot of laughs. The spin-off features the kids’ favorite penguins (Skipper, Kowalski, Rico and Private) going on their own adventure where they team up with an elite combat team called North Wind to take out Donald (Dave the Octopus) from the kidnapped penguins. .

Penguins of Madagascar really takes the cake because of his funny laughs and action-packed explosions. The cute, cuddly penguins pull off one hell of a trick to prove that DreamWorks still delivers top-notch family entertainment content, just like Pixar.

The hilarious movie from the creators of Madagascar shows how important world espionage is for birds too! So let’s join forces with North Wind’s elite team to save the world. Well, the movie is a globe-trotting, twist-up adventure the whole family will love!

Cats & Dogs will have children who look at their beloved furry pet a little differently. The main characters in the 2001 comedy are cats and dogs who have a long-standing spy rivalry. The adorable furry figures combined with the use of a spy storyline will captivate audiences.

The story is comical but full of drama as the neighborhood cats and dogs work in secret against each other. The main cat character is hoping to stop the creation of a new vaccine that will rid humans of dog allergies. It’s up to a Beagle and his comrades to stop the cats from carrying out their plan.

It will be safe to say that Cats & Dogs is a good mix of James bond and Men in black! The Smart Movie is a fun watch full of honest characters. The attention to detail and storytelling is exceptional, which makes the film an underrated masterpiece.

Great hero 6 is the first Disney animated feature film adapted from characters appearing in Marvel comics; and the mix of two fan favorite content turned out to be superb. The film not only became the highest-grossing animated film of 2014, it also won the Oscar for Best Animated Feature that year.

The film follows robotics prodigy, Hiro Hamada, who gets pushed in the right direction by his brother. However, when Hiro’s brother dies, Hiro decides to team up with his friends and Baymax, a robot, to form a group of high-tech superheroes for revenge. The film was praised for its smooth pacing and characteristic, touching Disney tone.

The impressive plot is funny, enjoyable, and features a mature theme. The story is well written, engaging, and includes various scenes that will appeal not only to the little ones but also to the older audience. Visuals are more developed than Disney computer animated films released before Great hero 6 and the animation is quite detailed.

Despicable supervillains have also changed their minds. Despicable Me is a 2010 film that takes this concept to imaginative new heights with Steve Carell’s voiced character, Gru. He follows the criminal mastermind after adopting three orphan girls as part of his ploy to steal the moon and be known as the greatest thief in history.

However, his conscience is tested when the girls begin to think of him as their father. The film was a great commercial success and led to the creation of the Despicable Me franchise and also gave birth to the beloved servants.

Although far from the truth, the story is incredible and very entertaining. What makes the film so beloved is the dynamic roster of characters. The hilarious movie isn’t just for kids, adults love it even more. The interesting plot, humorous dialogues, and acts of laughter out loud keep audiences enthralled throughout. The classic minions film raised the stakes for Illumination as Despicable Me showed a most hated man’s journey to finally finding love – thanks to three little girls!

What do superheroes and spies have in common? Well, both of them take on life-threatening missions to save the world. Teen Titans Go! At the movie theater is a superhero animated film based on characters from DC Comics. The film follows teenage superheroes who travel to Hollywood to get noticed by a top filmmaker as they want to join the bandwagon of superhero characters depicted in the films.

However, this turns out to be a major distraction as the super-villain, Deathstroke hatches a plan to take over the planet. The film was noted for its combination of family and ironic humor combined with tap-worthy musical numbers and a surprisingly witty storyline.

The film outperforms its original predecessor and is a solid crossover overall. With good plot, good writing, animation and a great balance of humor and action, Teen Titans Go! At the movie theater is a must-see children’s spy thriller. The film is a shining example of how to please longtime fans without relying too much on nostalgia!