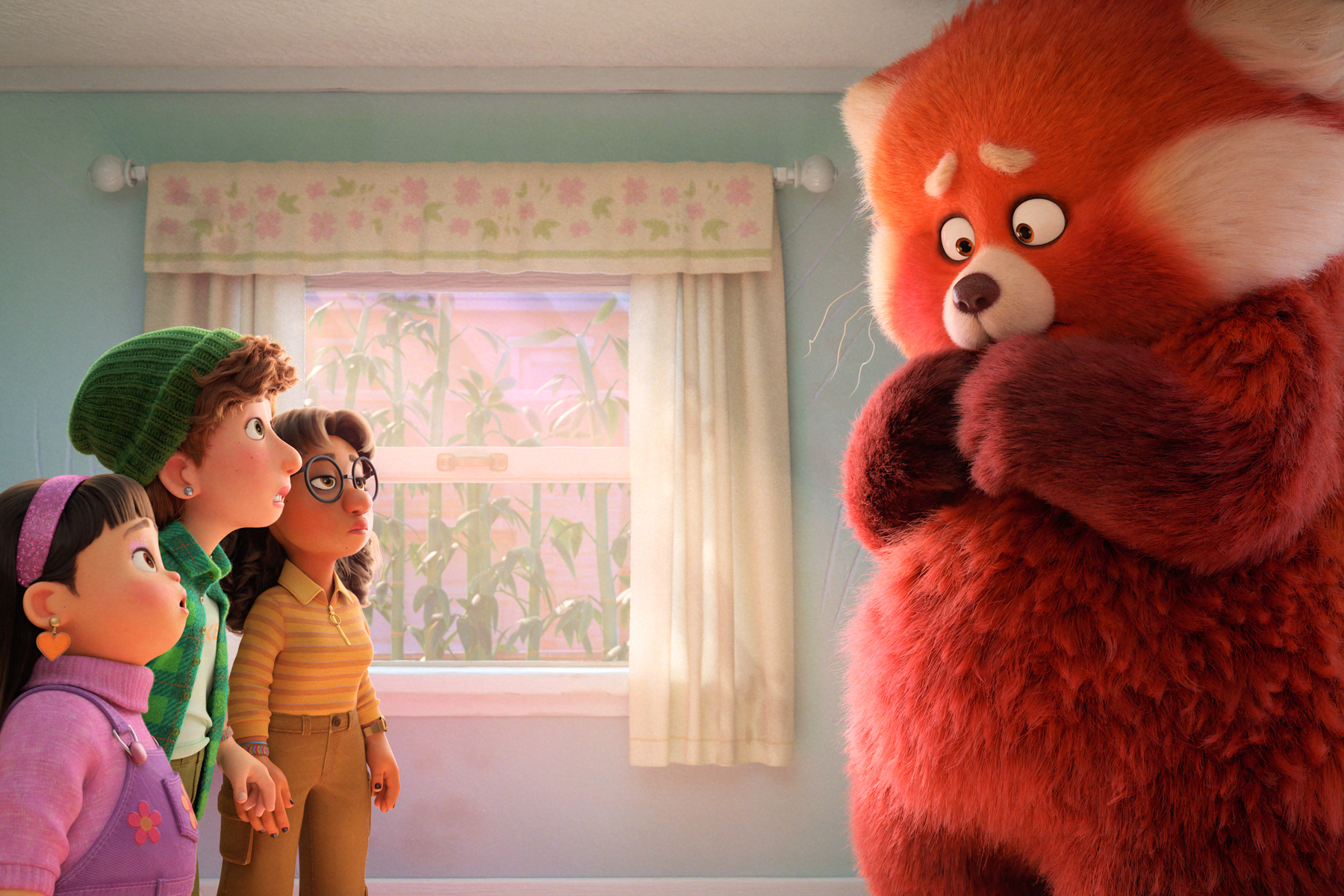 What’s your favorite euphemism for menstruation? Personally, I’ve always loved the silliness of “bringing in the painters” and the evocative “shark week” imagery. Maybe you’re “surfing the crimson tide” (in fact, has anyone said that since the mid-1990s?) or, more bizarrely, enduring a “visit from Aunt Flo.” Perhaps you are of the strictest feminist school of thought which dictates that such metaphorical language contributes to the stigmatization of this very natural process, and you limit yourself to purely clinical terms involving blood, progesterone and the uterine lining. Or maybe, like Ming, the sleek Toronto tigress mother voiced by Sandra Oh in Domee Shi’s delightfully personal and perky coming-of-age flick. turn redyou are of a more poetic bent and you shyly ask your preteen, who has locked herself in the bathroom in a fit of mortification, “Has the red peony bloomed?”

Inside this bathroom, 13-year-old Chinese-Canadian Mei (Rosalie Chiang) has experienced nothing so delicate on the ground floor as a flower unfurling its pretty petals. Instead, under the influence of hormones, humiliation, and an old family blessing/curse she didn’t know existed, Mei transformed into a Portacabin-sized cabin. ailurus fulgens, that is to say the red panda which is the emblem of his Chinese ancestors. A rambunctious, self-assured jerk who succeeds in school by day and works at the temple the family runs as a tourist attraction by night, she has so far managed to balance her worlds. But between honoring her parents and kicking her with a tight team of classmates – Miriam (Ava Morse), Abby (Hyein Park) and Priya (Maitreyi Ramakrishnan) – even a girl as outgoing, often annoying, energetic as Mei struggles to live up to everyone’s expectations. It wouldn’t take much to mess it all up, and Mei gets many. She gets puberty.

Suddenly, she’s scribbling pictures of herself in compromising hand-to-hand combat with the boy in the local grocery store and creating fantasy scenarios, with her friends, involving her favorite boy band. 4* Town – inexplicably a five-piece – is just one of the things that turn red gets so right, managing to parody the fabricated wholesomeness of the boy band phenomenon, while remaining deeply attached to and grateful for the service they render by channeling the fantasies of young girls at a vulnerable stage of emotional development. And it’s topped off with some very plausible 4*Town hits, written by Billie Eilish and her brother Finneas O’Connell, that are catchy enough to be compelling, but just vapid enough to be fun (see the lyrics, “Had friends and j I’ve had friends, it’s true/But they don’t turn my stomach like you do”).

It’s a bit of a surprise that this is Pixar’s first-ever feature film directed solely by a woman. On the other hand, it’s hard not to be a little happy that the honor, albeit a belated one, went to Domee Shi, the previous Oscar winner for Weird and Witty Animated Short. Bao, in which a steamed bun became a surrogate child for a mother suffering from empty nest syndrome. On an equally intimate canvas, where many of Pixar‘s recent hits have morphed into complex, metaphysical explorations of the afterlife (coconut) or the forelife (Soul) or the inner life (Upside down), turn red looks a lot like its pint-sized protagonist and goes proudly, noisily smaller, yet has the confidence and wits to push at will in a bright red metaphor for the elation and confusion of the changeover. ‘adulthood.

The early 2000s Toronto setting, in which the city itself is flattered by the neon and pastel color palette, allows Shi and co-writer Julia Cho to embellish a mostly simple story with all sorts of detail. intimates lovingly observed: the fashions of the 2000s, the tamagotchi craze, the traditions of ancestor worship that Ming upholds, the truly tantalizing food preparation scenes thanks to Mei’s calm and kind father (Orion Lee). And while the character designs don’t seem particularly new to Pixar making their “real world” schtick, the faces seem to have reached new heights of expressiveness and subtlety, while the choreography – so crisp in its comedic timing – has to be something of the best the animation giant has ever delivered. It’s a bit unfortunate that turn red goes straight to streaming, especially during the ridiculous stadium finale in which scale is key.

But the relative simplicity of the story, which involves Mei learning to deal with her new ailurine alter-ego while desperately trying to get to the 4*Town concert that her mother so vehemently disapproves of, also belies the many ways in which the remarkably silly central image – a teenage girl suddenly transforming into a gigantic, fluffy and somewhat smelly red panda – may work. En route to a hardly unexpected moral of embracing your inner weirdo and learning the difference between self-control and self-repression, the panda also becomes a powerful cultural allegory. This is particularly true for Asian immigrant children of the last generation, whose challenges in balancing traditional values ​​and the contemporary environment are very different even from those of their parents, but it is also representative of the generational divide in much greater terms. wide. The panda is, after all, a conduit for Mei to reconnect with her mother (and all the women in her family), in a ritual that gives them, among all things, a Little mom moment.

And somehow, at the same time, Shi also finds space in this wacky, fast-paced adventure to grow friendships between teenage girls: Miriam, Abby, and the very subtly coded gay Priya play supporting roles. satisfying (as a gang, if not so much individually) to help Mei understand that maybe being a person with a panda inside isn’t so shameful after all. turn red is definitely a persuasive manifesto to “unleash the red panda” to add to this list of menstrual euphemisms, but that’s not all. It is also a luminous, moving, funny film, happy film about adolescent angst, which does not condescend but does not overload either. It is, perhaps most notable, a movie about 13-year-olds that 13-year-olds might actually enjoy.