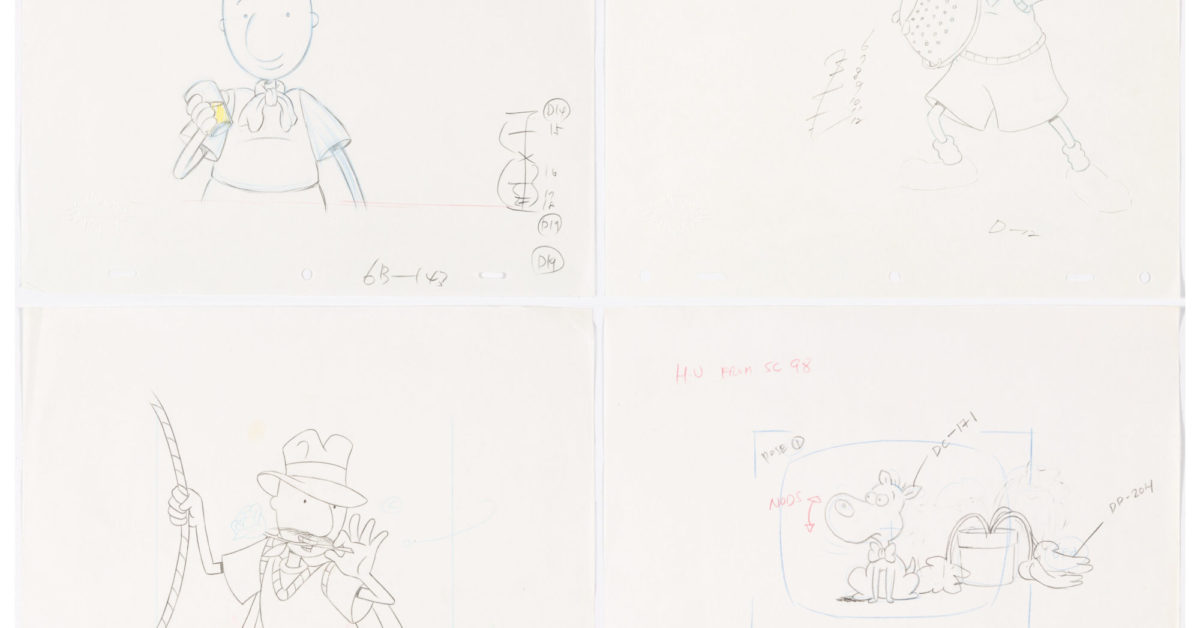 Created by Jim Jinkins, Doug was a cartoon broadcast on Nickelodeon from 1991. We see it, with Rugrats, Hey Arnoldand Ren & Stimpy, as one of Nickelodeon’s classic cartoons. Jinkins developed it as a way to portray children as he saw them at the time, softer and rather than empowered, thrown into baffling decisions in which they must learn to make the right choice. It’s by making that right choice and finding their way to being a good person that it ends up empowering them. Fans of this nostalgic ’90s classic can head to Heritage Auctions to bid on a Doug group of drawings featuring the main character and his dog, Porkchop.

You can see the certificate of authenticity here.

“Dear diary, it’s me, Doug…” The inventive Doug and his trusty dog, Porkchop, are featured in this large group of four layout designs. [The series] featured an animation style with simple lines and down-to-earth themes mixed with [daydreams,] a combination that made this show an icon for its time and a favorite of many. The first drawing, numbered D19 in the lower right corner, shows Doug holding a glass measuring 4″ x 5.25″. [The lead character] is shown using cooking utensils to defend himself in the drawing numbered D-12, with the character standing 7″ tall. In the next drawing we have… Doug? No, it’s Jack Bandit! Doug dresses up as this Quirk -ego during the episode “Doug Gets Busted” after a school project goes wrong in this layout drawing, numbered D11 in the lower right corner, with Doug standing 4.5″ tall. Also featured is a whimsical image of Porkchop wearing a tie, as seen during the episode “Doug’s No Dummy”, with the friendly dog ​​standing 3″ tall in the design numbered PC-1 in the lower right corner.

Heritage Auctions notes that the designs are all rendered in graphite with colored pencils and are all embossed with the Nickelodeon logo in the left corner. Four Nickelodeon COAs are included in this bundle. Regarding condition, Heritage notes that the C11 drawing shows very light staining and that light wear from production can be expected from the lot, which is marked in “very good” condition. You can head to Heritage auctions today to bid on this nostalgic backstage lot.