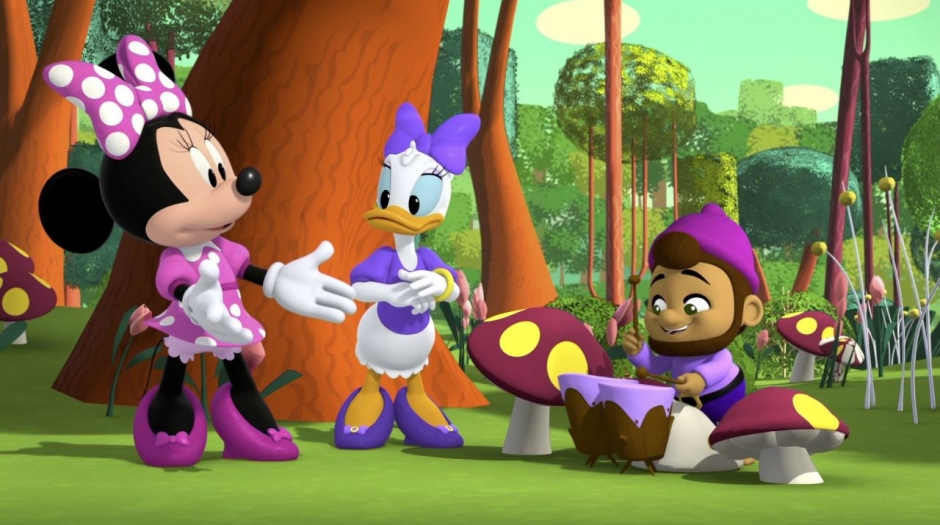 Disney Junior’s popular animated series, Mickey Mouse Playhouse features an all-new character in the upcoming episode “The Music of the Seasons” which premieres Friday, May 13. The series’ iconic characters, Mickey and his friends, meet Fig, a new deaf gnome friend. A drummer and music lover, Fig and his sister Olive help Minnie and Daisy understand how he communicates.

“Music of the Seasons” will air again throughout May and beyond, and Fig will appear in more upcoming episodes alongside Mickey and friends.

The episode was written by Kate Moran, who has close family members who are deaf and strives to bring more inclusion to the deaf community with her work.

“It was really important to me to write a character like Fig who was fun and smart and talented, who just happened to be deaf,” Moran shared. “His deafness doesn’t define him, nor is it the most important thing about him. It’s an aspect of Fig, among many other impressive attributes.

Disney Junior has jumped on the bandwagon, marking what is hopefully a milestone for Deaf representation in the industry. Recently, a number of popular animated series have added characters who use ASL to communicate, expanding inclusivity and promoting awareness.

Last month, The simpsons aired the episode, “The sound of bleeding gumsmarking two firsts for the series: Not only did it portray American Sign Language for the first time on the show, but it also showcased the talents of its very first deaf actors.

And in January of this year, it was announced that deaf actress Shaylee Mansfield would do a “sign over” performance in Season 6 of DreamWorks Madagascar: A Little Wild. The character is named and modeled after Mansfield and was animated using a video reference of the actress playing for the animators to build on, building on the previous five seasons featuring ASL characters and deaf.

Apple TV+ has launched its animated children’s show El Deaf in 2022. The 3-part animated series is about a young girl who finds herself superhero when she faces the loss of her hearing.

Speaking positively about these milestones, Moran added, “My hope for the future of diversity and representation in media is that we truly represent the great beauty of humanity. We need to show that “normal” is actually a broad spectrum.