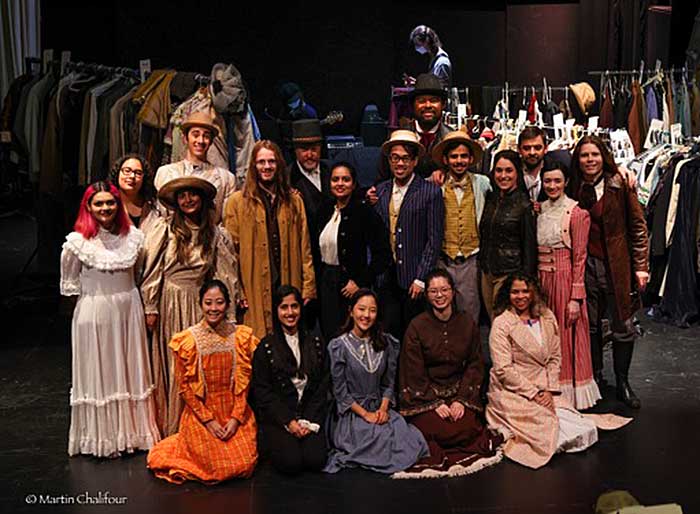 “From the Earth to the Moon” world premiere at Caltech, Pasadena

Together “From the Earth to the Moon” (Photo – Martin Chalifour)

If you were lucky enough to enjoy the Star Trek parody “Boldly Go!” in addition to sold-out pre-pandemic crowds, you’ll be thrilled to hear about the latest brain child from the same writers, Cole and Grant Remmen, which had its world premiere last weekend at Caltech’s Ramo Auditorium. In fact, if you’re into sci-fi and a bit of craft theater, “From the Earth to the Moon” might be the perfect way to spend a few hours.

Based on the story by Jules Verne, the original musical follows a small group of scientists in 1865 who decide their local gun club should be able to power an explosion large enough to carry people to orbit of the moon . Half the fun is watching real mathematicians and interplanetary scientists, all associated with Caltech and JPL, chanting at the top of their lungs about theoretical methods of space travel that are patently untenable. Their characters possess such raw enthusiasm and blind hope in humanity’s ability to “work out details later” that the project seems more reminiscent of the mid-20th century space program than post-war shock. a century earlier.

Our heroes, Captain Impey Barbicane (Joseph Jefferson), JT Maston (Julian Wagner) and their friends, meet an ambitious journalist, Phoebe Penrose (Anne Marinan) who joins their team to cover the story. A forced romance unfolds with Maston, while Penrose also struggles to overcome her publisher’s misogyny. It wouldn’t really be a musical if great tragedy ensued, so there aren’t too many surprises in the story; however, there are some truly wonderful moments of harmony within the big ensemble as well as fantastic deliveries of story songs like “Funds!” and “Florida or Texas”.

An intrepid French adventurer shows up at the end of the first half, Michelle Ardan, played by the agile and quick-tongued Holly Bender, who brings a touch of individual flair and fun to the rest of the show. His numbers “C’est moi” as well as “Word on the Street”, performed with the ensemble and fellow pioneer Penrose, stand out as highlights. The beautiful voices of Jefferson, Wagner, and Marinan carry their numbers well, though the pacing of the show’s first half lags a bit due to so many large set numbers. Choreographer Raevin T. Fleming does what can be done with nearly 20 people in a very small space, and the full cast consistently land lines, dance moves, and character moments while keeping their minds bright and full. of hope.

Part two picks up speed as we spend more poignant moments with individual characters. A joy throughout is Disney Animation technical advisor aka Allen Corcoran, who plays the team’s rival, Captain Nicholl. It is suspected that he won the role for his ability to channel the intense speed of “An Enemy Among Twenty-Five Million Friends”, almost on a “Pirates of Penzance” level. The Bilsby and Bloomsbury Shooting Club’s team of female explosives experts (Anamika Shreevastava and Sara Anjum), along with General Morgan (Marcin Kurowski), allude to fine performances. They’re all making the most of their brief lines, but there’s still potential for more fleshed out allies for the first half and maybe a little less time overall.

Opening weekend technology was an obvious challenge, as the auditorium is also a conference room and contains no permanent sets. One can’t help but admire the courage of the cast and crew as they move massive risers between each of the twenty-three separate scenes.

There’s a lot of “theater that might” spirit in “From the Earth to the Moon,” so much so that you’ll find yourself wanting everything to work out in the end. A festive throwback to the days of the “spectacle” in a real real person production on campus!

Colorado Boulevard is your place for enlightening events, informative news, and socializing for the greater Pasadena area.
We strive to inform, educate and work together to create a better world for all of us, locally and globally.