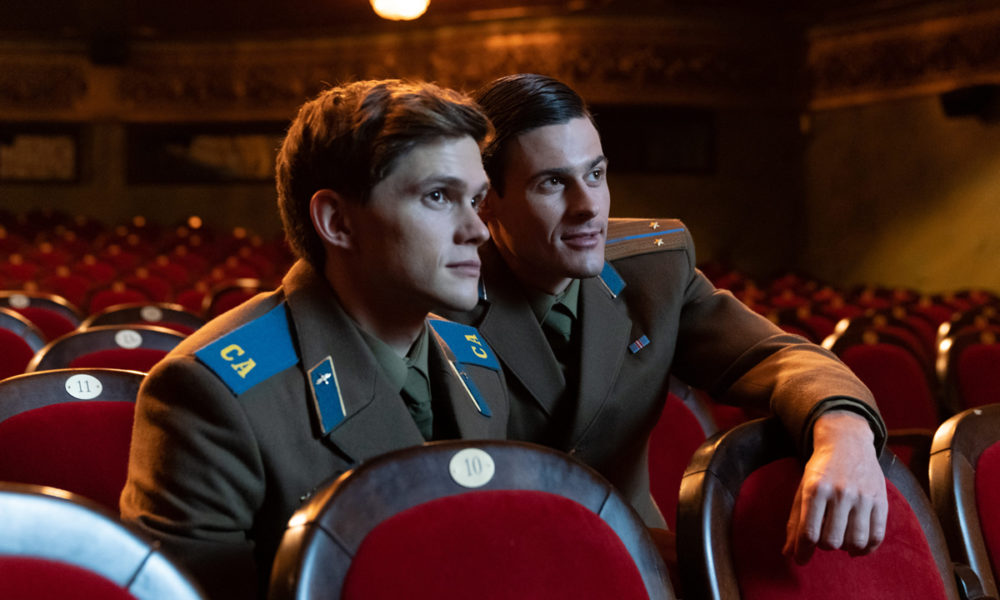 From time to time, current events and the release of a particular movie seem to coincide as if by fate. “Casablanca,” for example, seen by its studio as a run-of-the-mill melodrama with limited box office appeal, was rushed into an early release to capitalize on the Allied invasion of North Africa, which took place in the end of 1942. The rest, of course, is history.

A similar twist on the fateful moment surrounds “Firebird,” a British-made gay romance set on a Soviet air base during the Cold War, as it enters its official US theatrical release on April 29. Based on a memoir by Sergey Fetisov, it’s a true story that not only resonates with the oppressive state of LGBTQ rights in modern Russia – a key factor in why the film was made in the first place – but may pique the interest of American moviegoers thanks to the ongoing Russian invasion of Ukraine.

“Firebird” – co-adapted for the screen by Estonian-born filmmaker Peeter Rebane and British actor Tom Prior, who direct and star respectively – begins in the late 1970s as Sergey (Prior) , a Soviet Air Force soldier with dreams of going to Moscow and becoming an actor, is anxiously counting down the days until his military service ends. His life is suddenly changed irrevocably with the arrival of Roman (Oleg Zagorodinii), an ace fighter pilot newly assigned to the base; Handsome, cultured and approachable, the new officer immediately catches the eye of Sergey and his close friend Luisa (Diana Pozharskaya), the base commander’s secretary – but it’s with Sergey that he makes the deepest connection. , and the two quickly become lovers .

Communist prohibitions against homosexuality are harsh, however, especially for men in uniform, and even Ramon’s privileged position is not enough to shield them from the ever-watchful eyes of their superiors. With his career and freedom at stake, Roman first breaks up with Sergey and even enters into a fictional marriage with the unconscious Luisa. But the love between them proves too strong to resist, and their cursed affair lasts for years – despite the grim consequences they face if found out.

Stories of oppression like this have never been uncommon in queer cinema. After all, movies, like all art, are an expression of real life, and as a result, the inevitable specter of the closet has hovered over LGBTQ films over the years. As a result, there are quite a few viewers who feel like they’ve seen more than enough homophobia and grief on their screens to last a lifetime. For those people, a movie like “Firebird” might be a tough sell.

Yet nostalgia is a powerful force, capable of bathing the past in a warm glow that softens harsh realities while making our happy memories even happier than we remember them, and Rebane’s film uses that to its advantage. . The director infuses his lovingly recreated period setting with not only exquisite attention to detail, but also a lush, quaint atmosphere that sparks our fondest memories – or fantasies – as much as our appreciation of the block’s retro aesthetic. ‘East. The central romance fuels our idealized scenarios of illicit love at first sight, capturing that breathless mix of tenderness and searing sexual chemistry as well as the throbbing fear of discovery that somehow makes being together all the more irresistible; we are driven, by stealthy after-hours love scenes and idyllic, sunny scenes by the sea, to believe that these handsome young lovers will somehow get it all done.

The impossibility of their situation, of course, eventually catches up with them, and while the homophobia surrounding them has been inescapable from the start, it’s at this point that the film really begins to explore its more subtle effects. Fear weighs on their relationship, and its poison spreads like a virus to anyone who becomes entangled in their life together; one of the film’s most powerful touches is the compassion it instills in Luisa, who may be unknowingly participating in the enforced charade of their life together, but who suffers from it nonetheless. It’s an all-too-rare reminder that repressive homophobia also ruins heterosexual lives.

Indeed, compassion is at the heart of “Firebird” and keeps it from being just another pretty but bittersweet gay love story from a bygone era. Rebane said he was inspired to make the film by the resurgence of attacks on “fundamental human rights, equality and freedom” around the world, and in particular the discrimination and repression suffered in many countries. by LGBTQ individuals and families. By telling the real-life story of Sergey (who died in 2017, shortly after taking part in lengthy interviews with the filmmakers), he hoped to “further promote respect for a universal human right: to love and to be loved”.

Now, with Russia’s aggression in Ukraine making global headlines, Rebane reaffirmed his film’s purpose as a way to raise awareness of the “long history of persecution of LGBTQIA+ people and all who express their dissent from their authoritarian regime” by joining forces with a global advocacy group. All Out, in support of their work helping gay refugees from Ukraine and promoting “meaningful dialogue” about Russia’s anti-LGBTQ policies.

Yet, militant sentiment aside, “Firebird” is not political, but rather emphasizes the determination of a same-sex couple to exist, to survive despite suffering, even within the most repressive societies. . In doing so, he focuses more on matters of the heart than matters of state, which is aided by his deft cast – especially Prior, whose appeal as Sergey runs far deeper than his youthful appearance, and whose performance wears its heart on its sleeve without ever feeling overtly sentimental.

Perhaps it’s because of this as much as its period setting that “Firebird” feels a bit like a throwback to a bygone era. Flooded with elegant nostalgia, it seems seen from afar, more felt than lived, more dreamed than experienced. That’s not a bad thing; it’s an aura that gives a calming effect, cushioning the emotional blows we know are sure to come, and gives the film a sense of emotional balance that keeps it from becoming a tearful. At the same time, it also brings a sort of superficial quality to the events of the story, as if we’re watching a neatly arranged row of dominoes fall, which at times threatens to undermine the impact of the draconian cultural oppression to which its characters are subjected. confronted by reducing it to a mere plot device.

Still, it’s fitting enough that a queer love story feels a bit like a campy Hollywood classic, even when politically conscious. “Casablanca” raised awareness of the plight of refugees fleeing war-torn Europe, but it also gave us Rick and Ilsa; and while “Firebird” may be unlikely to achieve the same status as this venerable masterpiece, its noble intentions and unapologetic belief in love make it more than worthy of your attention.

ALT invites the community to its swamp with “Shrek the Musical”