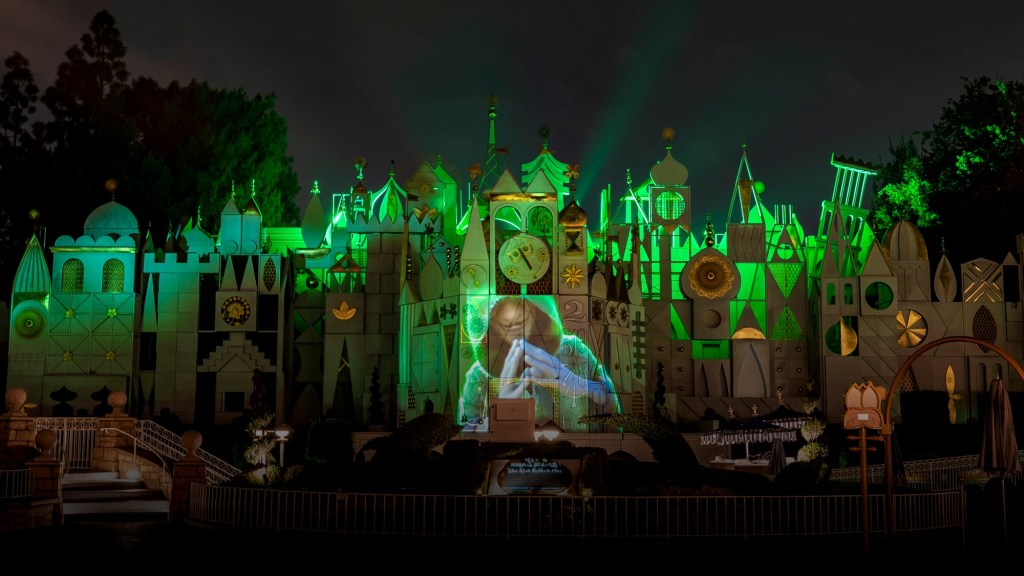 A new nighttime show based on the Oscar-winning animated film ‘Encanto’ and set to the chart-topping song ‘We Don’t Talk About Bruno’ at Disneyland marks Disney’s latest attempt to ride the wave of the hit blockbuster that has already been called a franchise.

A visual montage set to “We’re Not Talking About Bruno” will play on the facade of It’s a Small World multiple times per night for a limited time beginning Monday, April 11 at the Anaheim theme park.

The facade of Small World will be transformed into a canvas with selected moments from the film projected outside the attraction as the full original song plays. The tiles on the facade of Small World will flip, rotate and rearrange using projection images and lighting effects. The brief show culminates with a celebratory chorus and a nod to Bruno’s mysterious prophecy about Mirabel.

“Encanto” will be everywhere at Disneyland this spring.

A character from Mirabel will meet and greet for photos at Zocalo Park in Frontierland with a backdrop that pays homage to the Madrigal family.

Mirabel and Antonio dolls aboard an “Encanto” float will also play a role in the new seven-segment Grand Finale sequence when the Main Street Electrical Parade returns to Disneyland on April 22. The “Encanto” segment of the parade finale will feature the family’s Madrigal la Casita, magical butterflies and the Miracle candle from the film.

Disney has big plans for “Encanto,” which just won the Oscar for Best Animated Feature.

Disney CEO Bob Chapek described the hit “Encanto” as a franchise at the company’s annual shareholder meeting in February, suggesting a sequel could be in the works.

“We Don’t Talk About Bruno” became a hit song topping the Billboard Hot 100 chart for five weeks – making it one of Disney’s greatest songs of all time and making it sound rarefied. “Can You Feel the Love Tonight” from “The Lion King,” “A Whole New World” from “Aladdin,” and “Let It Go” from “Frozen.”

A sung version of the animated phenomenon from Walt Disney Animation Studios was released on Disney+ on March 18.

“Encanto” has been viewed on Disney+ more than 180 million times. On average, each Disney+ household has watched “Encanto” five times. If you haven’t seen the hit movie multiple times yet, that means another Disney+ household is picking up your slack and watching the movie on repeat.