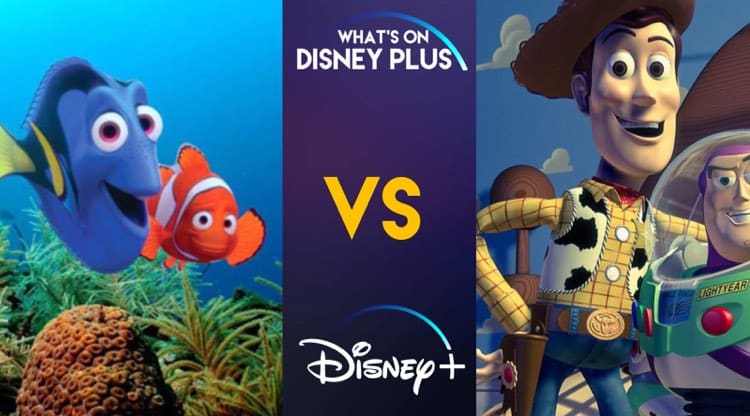 It’s time for a Disney+ battle again. This time we’re comparing two classic Pixar movies to see which one is better. One is Pixar’s very first film. The other is a classic that reminds us to “keep swimming”. Let’s see which is better: “Toy Story” or “Finding Nemo?”

The main character of “Finding Nemo” is Nemo, a small fish who is captured by a dentist who seeks to give him to his niece as a pet. This leads Nemo’s father, Marlin, to search for him. Along the way, he encounters other fish, sharks, and sea turtles who help him locate his son and bring him home. “Toy Story” has two main characters, Woody and Buzz Lightyear. One has been Andy’s favorite toy for years. The other is Andy’s new toy which is quickly becoming a favorite. Woody gets jealous of Buzz and throws him out the window. Woody must rescue Buzz and get caught up with Andy and his family as they move house. Both movies have great main characters, but I think Woody and Buzz bring more to the table. Point to “Toy Story”.

“Finding Nemo” doesn’t really have a villain. The fish in the dentist’s tank are scared of his niece because she has a habit of killing the animals he gives her, but she’s barely in the movie and not exactly evil. Sometimes Marlin’s fears and pride are the biggest villains. They hurt him and Dory more than anything. Great concepts that make for a great movie, but not a great antagonist. The villain of “Toy Story” is Sid, the boy who lives next door and likes to take toys apart and put them together with new parts. He has a behavioral problem, but in real life he wouldn’t be that bad. But for toys, it’s the worst possible thing. Since “Toy Story” has a real antagonist, it wins this round.

None of these films are known for their iconic music. That’s pretty much true of all Pixar movies. There are a few songs that stand out from the studio’s films, but few are as iconic as those from the Walt Disney Animation Studios. Of course, there are exceptions and “You’ve Got a Friend in Me” is just that. It’s an exception, because it’s as iconic as a lot of the main studio songs. Both movies have great scores that steer the plots in the direction of the filmmakers, so this one comes down to which one has the better song and “You’ve Got a Friend in Me” is hard to argue against. . Point to “Toy Story”.

As I said in the introduction, these are two classic films that have entertained several generations of Disney and Pixar fans. Both have memorable moments. “Toy Story” has Buzz’s first appearance, Buzz “falling in style”, the trip to Pizza Planet, the claw, Sid’s house, and Andy’s mother’s car. “Finding Nemo” has the barracuda attack, Nemo gets captured, Marlin and Dory’s trek, the sharks, Crush and Marlin finally get Nemo back. It’s hard to make a decision here, but I’ll give “Toy Story” the point. I don’t know if it’s more memorable, but it’s more memorable to me.

“Toy Story” wins this battle. I recorded 64 Disney and Pixar films in a parenthesis for these battles. “Toy Story” beat “Luca” in the first round while “Finding Nemo” beat “The Incredibles”. This win means “Toy Story” is in the Sweet 16. I can’t wait to see who he faces. But above all, which film would you choose?

Jeremy has been a huge Disney fan since he was a child during the Disney Renaissance. One day, he hopes to visit every Disney park in the world.