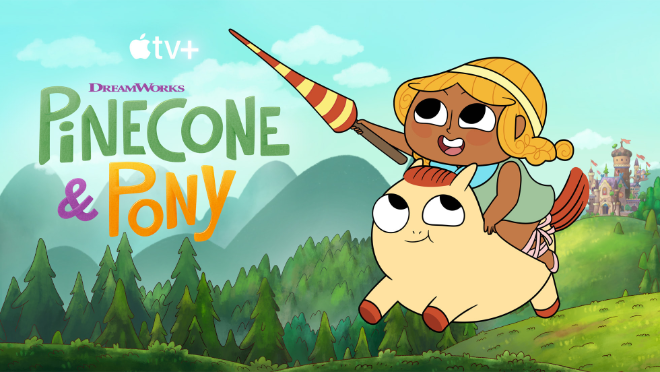 Based on the book “The Princess and the Pony” by New York Times Beaton, bestselling author and hailing from DreamWorks Animation and First Generation Films, “Pinecone & Pony” is an eight-part animated comedy for children and families about a young girl named Pinecone who, with the help of her best friend Pony , learns that there is more than one way to be a warrior. Together they will show their world how to defy expectations and that life can be a fun adventure if you let it.

The new series will premiere alongside a growing, award-winning lineup of original movies and series for kids and families on Apple TV+, including the recent critically acclaimed “El Deafo”; “Fraggle Rock: Back to the Rock” and “Harriet the Spy” by The Jim Henson Company; Jack McBrayer and Angela C. Santomero’s ‘Hello Jack! The Kindness Show’; Daytime Emmy Award-winning Sesame Workshop ‘Ghostwriter’ and ‘Helpsters’; Oscar-nominated animated ‘Wolfwalkers’; new series and specials from Peanuts and WildBrain, including “The Snoopy Show” season two, “Snoopy in Space” season two, and “For Auld Lang Syne”; and “Here We Are: Notes for Living on Planet Earth,” the televised event Daytime Emmy Award-winning based on the New York Times bestselling book and TIME Best Book of the Year by Oliver Jeffers.

Taken from MacDailyNews: Apple TV+ is creating a great list for kids and families!

MacDaily news note: Apple TV+ is available on the Apple TV app in over 100 countries and regions, on over 1 billion screens, including iPhone, iPad, Apple TV, Mac, popular smart TVs from Samsung, LG, Sony , VIZIO, TCL and others, Roku and Amazon Fire TV devices, Chromecast with Google TV, PlayStation and Xbox game consoles, and at tv.apple.com, for $4.99 per month with a seven-day free trial. For a limited time, customers who purchase and activate a new iPhone, iPad, Apple TV, Mac, or iPod touch can enjoy three months of Apple TV+ for free.

Buy the Apple Store on Amazon.