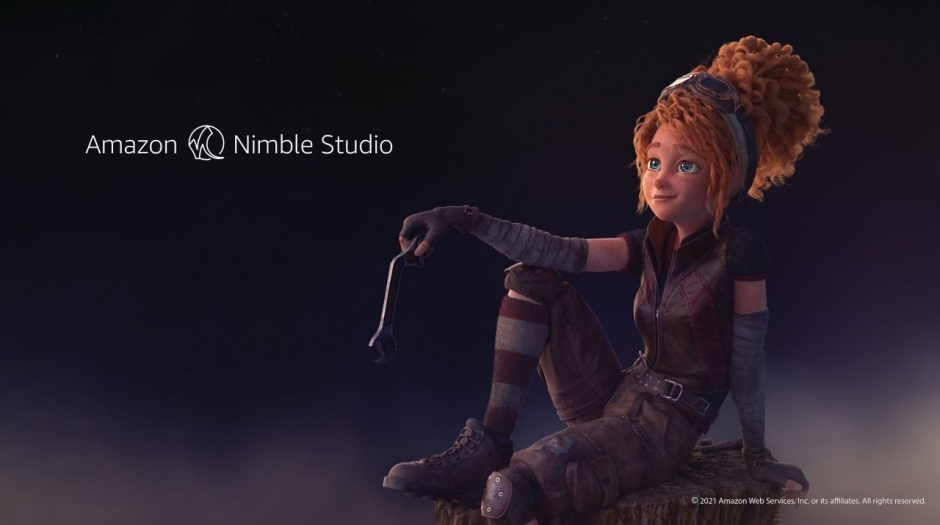 Amazon Nimble Studio Gives Animators a Home in the Cloud

Even before the COVID-19 pandemic forced much of the media and entertainment industry to adapt to non-local ways of working, the benefits of remote production were increasingly recognized and innovative pipeline designs were gaining ground across the industry. Among those who first saw the potential of cloud-based animation platforms to cut costs and streamline production was Rex Grignon.

A longtime luminary at DreamWorks Animation, Grignon has worked as a character animation manager on films such as Antz, Shrek, and Madagascar and its sequels, and was the lead designer of animation software Premo, which won a Technical Excellence Award from the Academy of Motion Picture Arts and Sciences. In 2014, along with fellow DreamWorks alumni Jason Schleifer, Bruce Wilson and Scott LaFleur, and with the support of a number of venture capitalists, Grignon founded the Nimble Collective. Four years later, they launched Nimble Studio, the industry’s first end-to-end cloud platform for commercial studios and business animation production.

The next step came less than a year later, in May 2019, when Nimble Collective was acquired by Amazon. â€œWe found our visions in helping M&E companies move their workloads to the cloud to be highly aligned,â€ co-founder Grignon said of the acquisition. â€œNimble was born on AWS [Amazon Web Services], so it was the perfect house for us! â€

Fast forward to April 28, 2021, when AWS announced the general availability of Amazon Nimble Studio, an pay-per-view production service offering unlimited access to high-power accelerated workstations, high-speed storage, and on-demand rendering resources across Amazon’s global infrastructure. With no upfront fees or commitments, Amazon Nimble Studio allows customers to set up a content production studio – using only the resources initially needed – in hours instead of weeks, then ramp up resources when demanded. rendering is maximum, and reduce them once the projects are completed.

â€œWe’ve been wanting to help customers with these heavy M&E workloads for years,â€ says Kyle Roche, head of immersive technology at AWS. â€œCustomers were having difficulty moving massive amounts of data to the cloud, organizing and organizing things before they could return them. So over the years we’ve started to see the push for virtual desktops. Because if you’re rendering in the cloud, placing your data next to where you’re rendering really helps streamline that process. You don’t have that abrupt end to your on-premises workload followed by your cloud workload.

Roche also emphasizes that their goal is to provide end-to-end services to clients of all sizes, from large studios to independent artists.

â€œThis is one of the important distinctions of our platform,â€ he confirms. â€œWe want this to work for all the different levels of studios. There is full API support, with the ability to configure everything the biggest studios need. And then there’s a wizard-like feature called StudioBuilder to help small independent shops set up more easily.

An example of Amazon Nimble Studio at work is Key, an animated short created by FuzzyPixel, a production team at AWS made up of artists and creatives who test new technologies to make sure they withstand the rigors of real-world production. Learn more about the project here, and take a few minutes to enjoy the movie.

Yet, given that studios have a wide variety of technologies – from licensed software and their proprietary systems, to render farms and workstations – is it really plausible to integrate everything effectively? Or is it more realistic for established studios to create a largely stand-alone environment on Amazon’s platform that interfaces with their internal systems, but is a separate entity?

â€œI think it really depends on where they are in their ‘journey to the cloud’, for lack of a better term,â€ says Roche. â€œIf a studio is already using virtual desktops, they’ve done some of the work by moving their pipelines, their license servers, things that are happening on the creative side, and those will move immediately to Nimble. We provide what we call an AMI, which is basically a template for a machine image. And some studios can customize that right away.

He continues, â€œThen there are the people who may be entering the cloud for the first time, and they have the opportunity to see if they want to change the way they work. They can re-evaluate how things work, the differences in flexibility, the ability to scale your infrastructure remotely, things like that. Their integration experience could therefore be a little different. You can also see a studio picking a project to run in the cloud to see how it goes, or maybe create a smaller sub-studio first. I think we see all of these different models today.

In addition to the potential cost savings and the much greater flexibility that comes with working in a scalable virtual environment, Roche also points to a less obvious benefit, especially for large studios that need to protect intellectual property.

â€œIf you are working on a project where you need to bring in additional artists, but you have resources that you want to keep as secret as possible, we can protect the resources on the workstation,â€ he explains. â€œYou can ask an artist to come in and work on textures or materials, but they never actually touch the asset. They work there only in the context of this job. And I think those things are probably going to help specific studios scale and work faster. “

Finally, when asked what he found most exciting about the new paradigm and the kind of impact it can have, Roche talks about an internal project that Nimble led last year as part of from which they produced an animated short. The goal, he said, was “not to optimize anything.”

â€œAnd so,â€ he says, â€œwe had 16K textures like everything, and we went basically crazy and we didn’t optimize any of those things. And then, as we watched the project unfold and that we were tracking the costs, we noticed that some artists were working in a different way. One in particular was running seven shifts at a time to go through variations of his Houdini simulation. It’s just not possible with the way people work today. At the most, an artist can have two of these huge machines on his desk, so he can go back and forth, but no one is buying. seven or eight of these high powered GP machines, so what really excites me is seeing artists evolve and change the way they work, just because they have more choices and options.

As for the man who started it all, Grignon is currently director of Amazon Nimble Studio’s Go-to-Market team, which gives him the opportunity to interact with clients and studios on a daily basis (â€œc ‘is what I love doing! â€) and works closely with the engineering and product teams at AWS.

â€œCloud-based production,â€ he says, â€œallows artists to have the ability to seize exciting opportunities without uprooting their lives and families. They can live wherever they want while working in an industry that they want. they love it, and that’s why I started developing cloud-based production tools. For studios, they can easily reach global talent, bring new perspectives and connect with artists from around the world I think the past year has really highlighted the importance of being able to work flexibly and has shown that not only remote production can be done, but is preferable in many ways.

Jon Hofferman is a Los Angeles-based freelance writer and editor. He is also the creator of the Classical Composers Poster, an educational and decorative music timeline that makes a wonderful gift.